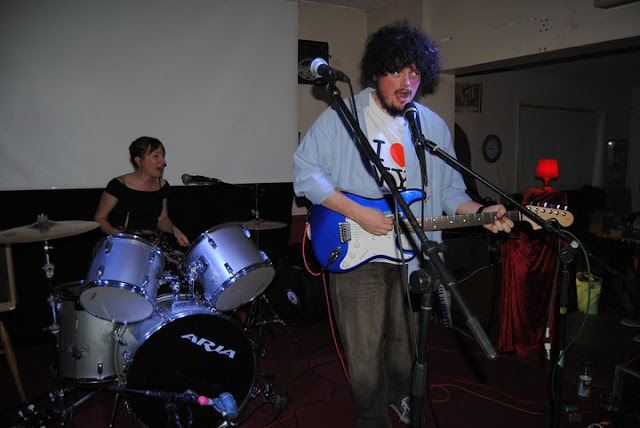 Why did you choose the name Anguish Sandwich?
Chris : Do you want the real answer or some kind of fake interview answer?
The real answer.
Chris : Ok, I think…a couple of years ago, Cath and I went to a comedy festival in Dublin, and we had travelled from Northampton to Dublin specifically to see one comedian. A guy called Eugene Mirman and he is kind of an absurdist, he makes a lot of videos on the internet, comedy videos, and one of them is a mock art film. Throughout the whole thing there is loads of close ups of his mouth saying things and robotic computer voices. And one of the things he says in it is just ‘anguish sandwich’ and err, it just sounded like a funny phrase. And…we’re a pretty stupid band. So, it seemed to work at the time. Now we are kinda regretting it.
Cath : No…
Chris : No, we are not regretting it.
John : I’m enjoying it.

Chris : Yeah, but we do get some vague criticism for it.
Cath : People like it or people really don’t like it. Some people have been nice, but…
Chris : I don’t think that people will know what to think when they hear the name Anguish Sandwich.
Cath : Could I just add in, this is really embarrassing, but Chris and I…Chris does it too, that’s why I’m dropping him in it, both Google Anguish Sandwich. Probably quite often.
Chris : Who doesn’t do that?

Cath : On Twitter, someone had written, it might have even been to do with this gig, yeah, about this gig. And this girl had written: ‘I’m not going to see a band called Anguish Sandwich, they sound like some kind of shoegaze NME band.’ And I was like ‘what does that even mean?’. Is that really what the name conjures up?
Chris : If you’d of put the word ‘anguish’ in a band name, without the word ‘sandwich’ following it, then erm, you would draw very different conclusions.
Cath : People expect ‘raaah!’
Chris : Or they expect like, The Smiths, don’t they? Like, anguish, you know! It’s over wrought and emotional.
John : I kinda like that about the name though. You don’t necessarily know how a band is going to sound from hearing it, and I think that’s maybe one of  the good things about our band name.
Chris : We certainly could’ve taken the name of an animal followed by the name of erm, a geographical feature. That would of worked as well.

Cath : What are you thinking of?
Chris : We could have been called…Eagle River!
John : Tiger Mountain…
Cath : (Laughs)
Chris : Or, erm, Stoat Gully.
Cath : That’s the British version.
John : Lizard Plane…
Chris : Yeah, that’s going to be my side project. And it’s going to be called Stoat Gully. And we are going to play traditional English folk music. For Morris dancers.
How has the Internet helped you as a band?
Chris : We can email people. Yeah. Email.

Cath : No, it’s great isn’t it? You can put music up and people can search you and listen to your stuff straight away. So, yeah. It’s really good, but then there is that assumption that like, you’ll have an Internet presence and it’ll sort of tell your whole story. Because do you remember that, the lady who interviewed us for that other magazine…said that, err. She said ‘I tried to find out about you online but there wasn’t really anything about you. And that’s weird, the assumption that people can just go online and find anything about…
Chris : Yeah, but I think that comes with longevity doesn’t it? Because, like, at that point, we’d not had any reviews anywhere really. We had a couple of people mention us in passing and things, like just friends. But like, at that point when somebody really took an interest and wanted to write an article about us, there was nothing to find online about us.
Cath : You hear about these bands don’t you? That have that level of mystique around them. Where it’s sort of like nobody knows where they come from or who they are and that’s kind of cool but then at the same time, you sort of want to get out there and you want people to hate us still, so…

Chris : Yeah, it’s a difficult thing to balance isn’t it?
A double ended sword!
Cath : Yeah.
Chris : I think you’ll find it’s actually a double edged sword. A double ended sword wouldn’t be much good.
John : Like Darth Maul.
Chris : The internet is a weird thing, because personally, like I don’t want to be one of those people going onto all the message boards and posting links to my own band and I don’t want to be one of those people who bug people on MySpace to, you know, ‘check out our new tracks!’. But at the same time, I do want it to be there, for people to be able to find us, rather than us push ourselves onto others. 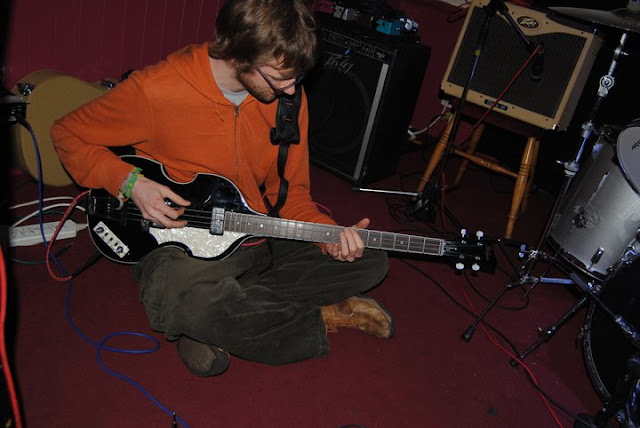 Do you think it’s important to release music for free these days?
Cath : (Whispers) John, you answer this on. John, say something.
Chris : (Laughs)
John : Erm, yeah I think it’s important to release some music for free. It’s easier to get people to listen to you when there is not that much pre-commitment to it there. I think we’d like to maybe look at getting some 7”s done as well. And I kind of like that if you are going to sell something, you have something that is quite collectible and desirable. Sort of an object and a thing as well as the music that’s on there. And I don’t think the aim for the band was to sort of make any financial gain from it.

Chris : Certainly not in the short term. No, yeah, I’d agree with that, what John said. It is important to get it out there and that’s the easiest way to do it, to say: ‘here it is, you can have it for nothing’. It would be great if every band could say : ‘here it is, give us a pound per track’. But you can’t do that, it doesn’t work. It just doesn’t work. We’re not quite at the level where people will steal our music, so we might as well let them have it for nothing.

John : I can barely remember a time when you didn’t have the internet to get hold of music. And I think half the bands I love, I would’ve at least downloaded something from them for free. I don’t know, like, swapping tapes and giving each other CDs died out a little bit around when I left school. I think. And then when I got to university, we had all these new, wonderful file sharing devices.

Chris : Showing your age there John.

John : I’m not saying that swapping things between people is bad, it broadens your horizons I think. Because you can sort of delve off into things that are well liked by someone you know.

Chris : I like to look at it this way, we give away our music for free. A lot of bands don’t do that, but a lot of bands do that. I also download through nefarious means a lot of music, but I also spend a hell of a lot of money on music. So it’s all part of the same thing isn’t it?
Cath : The circle of life.
Chris : As Elton John said. You give something away for free, then hopefully someone is going to pay money for it in the future.
For someone who hasn’t heard you before, what can they expect?
Cath : Shambolic-ness, a little bit.
John : Steely professionalism.
Chris : Dead pan, serious, straight up balls to the wall rock and roll music. We’re basically The Rolling Stones for 2011.
Cath : Please don’t print that.
Chris : There is no real pre-tense to it. Just a stupid band with stupid songs played loud by people who don’t know how to play their instruments. And, you know, what’s more fun than that? Like, I don’t want to watch The Edge up there playing a guitar solo that he remembers! I wanna watch Jack Parker on stage playing guitar like he has never played it before. Because quite frankly, he looks like he has never played it before. I probably wouldn’t pay Jack Parker as much as The Edge gets paid, but…
If you could get a rapper on one of your tracks, who would you choose?
Cath : Nicki Minaj.
Which track would she guest on?
Chris : Well, we’d have to write a new one, wouldn’t we? I mean, I know Cath said Nicki Minaj, but I’d probably have to say Ant and Dec off of ‘Let’s Get Ready To Rumble’. Or  the Terry Wogan rap song that he did. It’s about the jungle or something. Or Macho Man Randy Savage, who did a rap album.

Cath : He’s dead.
John : Sadly.
Chris : Yeah, that’s true. It just wouldn’t work. We’re not Limp Bizkit, as much as we’d like to be.
What are your plans in terms of future recording and gigs?
Chris : Erm, well, we actually made a decision yesterday to…
John : Scrap everything we’ve done.
Chris : We had recorded and re-recorded seven or eight songs recently and erm, we weren’t happy with them. So we decided to go back to the drawing board with it. Erm, there are no concrete plans to record anything. There is the eternal hope that we will record something soon. Erm, and we will record something sooner or later. We are supposed to be having a CD come out soon but that’s on the back burner now because we need to get the recordings done. Erm, not a particularly interesting answer for a question. It’s just that we didn’t feel the recordings represented us completely which is a really pompous answer but you know, it just felt really kind of…

Cath : Well it’s fair enough because we got the demos out there and that’s fine. But if you are gonna re-do them, you want it to be right or there is no point in re-doing it.

Chris : Yeah, they felt more like another set of demos. It didn’t feel enough of an improvement on what we’d done before.
Have you got any final words?
Cath : Thanks for the twenty pence. (Anguish Sandwich were paid a lump sum of 20p for this interview)
John : We’ll spend it wisely.
Chris : Have fun, live long and prosper. Be good to each other. Be excellent to eachother. 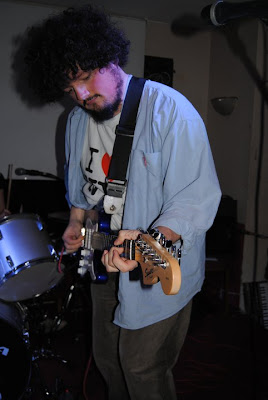 Secret Admirer allows fanboys and fangirls of the world to read about everyone's favourite bands, comedians, artists and musicians in their own words. Secret Admirer simply asks the questions and lets the creative types do the talking.